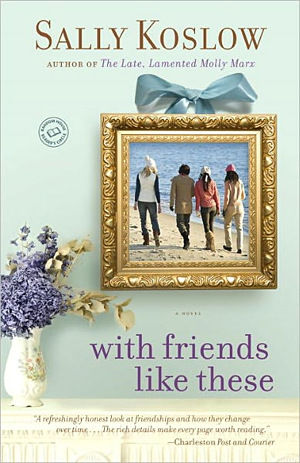 “Koslow (The Late, Lamented Molly Marx) lifts a…story of friendship to a knowing, sharp-edged chronicle of ambition and acceptance that’s smart, raw, and achingly real . . .  Koslow packs a trove of wit and wisdom into a slick…package.
– Publishers Weekly

“It’s a West Side story. In an eight-room, rent-controlled apartment on 92nd and West End, Koslow’s four twentysomething heroines — Quincy, Talia, Chole, and Jules — join forces as roommates in the 1990s. Fast-forward to the present, as job-sharing, multiple births and an underpriced fixer-upper co-op threaten their long friendships. Tragedy, comedy, and plenty of “Sex and the City” in this summer novel”
– Billy Heller Required Reading – The New York Post

“A quartet of women narrate this witty reflection on sisterhood.”
– More

“With Friends Like These probes beneath the surface to ponder the issues that arise when a woman has to juggle friendships, boyfriends, husbands, children and work. Where does her loyalty lie? To feel conflicted and stretched too thin seems to be the norm for today’s modern woman. Can you also admire a friend and be jealous — perhaps even resentful — of her at the same time? Koslow ruminates on these questions with a refreshing, and sometimes startling, honesty….. What could have been just another story of four female friends, a la “Sex and the City,” turns out to be, in Koslow’s hands, an elevated, biting tale of human foibles.”
– Bronwyn Miller, Bookreporter.com

“A sharp, perceptive portrait of friends and former roommates as they grow into their 30’s and 40’s… I can attest to the accuracy and unwillingness to take the easy way out from the author’s point of view. She’s real and refreshingly honest.”
– Ellen Scordato, Barnes & Noble Book Clubs