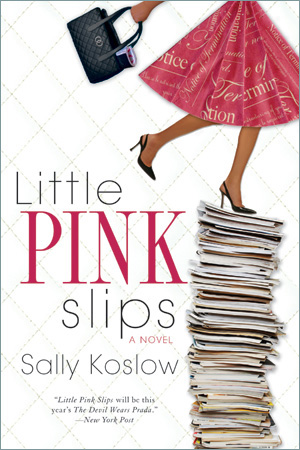 Sally Koslow, the former editor-in-chief of McCall’s magazine, has written a mordantly funny debut novel about the extremely unladylike business of publishing a ladylike magazine.  Little Pink Slips, an eyewitness report from the top of the masthead, is filled with gossipy revelations about celebrity obsession and behind-the-scenes details that only an insider could reveal.

Maggie Goldfarb felt born to be a magazine editor.  Growing up in Fargo, North Dakota, magazines had given her a window into a world where people wore clothes worn on red carpets and referred to Donatella Versace as if she were their college roommate.  Following her dream, she moved to Manhattan, reinvented herself as Magnolia Gold, and worked her way up the ladder to become editor-in-chief of Lady, the kind of magazine women throw into their shopping carts along with the mayo.  With a corner office, a designer wardrobe, and dozens of smart, loyal employees it’s Magnolia’s dream job.

Lady looked like a frump when Magnolia signed on—more than a hundred years old and two million dollars in the red.  Now she’s about to drag the aging diva fully into this century with a redesign: glossy paper; a larger format and the budget for top-notch photographers and writers.  Big changes are coming to Lady.  Unfortunately for Magnolia they aren’t the changes she has been anticipating.

Her plans for the magazine’s facelift go off the rails when her boss, Jock Flanagan, decides to ignominiously replace her with Bebe Blake, a brash TV personality who remakes the magazine in her own, hilariously inappropriate image.  With her ketchup-red hair, skintight clothes, and penchant for “boy toys,” Bebe is more out-of-control than a speeding limo.  Magnolia is shunted off to the darkest corner of executive purgatory—an office she shares with a cockroach or two – and she seethes from the sidelines as Bebe turns her beloved Lady into a sideshow.  As things go from bad to worse, Magnolia fears her career will never recover, but even she can’t predict how deeply satisfying her eventual triumph will be.  And not just at work: amidst the frenzy of backstabbing at the office, Magnolia finds Mr. Right in a city of Mr. Not-Quites.

Inspired by real-life events, Little Pink Slips is about the fall, rise, and sweet revenge of a woman who witnesses corporate shenanigans at their most flagrant.  Focused on the media business in all its malfeasant glory, it’s delicious, can’t-stop-reading fun as well as a reflection on America’s obsession with celebrities.